View source
watch 01:36
We're Getting Mutants in the MCU - The Loop
Do you like this video?
Play Sound

American
Axel Steel is a main character in the Guitar Hero series. He is one of only a handful of characters to appear in every game in the series, a distinction only shared with Johnny Napalm and Judy Nails. He represents the hard rock and heavy metal genres in all of the games, specifically the "old school" precursors of heavy metal from the 1970s and 1980s.

Throughout the Guitar Hero series, Axel's basic appearance is that of a muscular young white man, with medium-length brown hair. In the Neversoft installments, he looks significantly older, has a slight five-o'clock shadow, and has more hardened features.

Axel wears a blue ripped-sleeve denim jacket over a black, short-sleeved T-shirt with a white skull, somewhat blue old jeans with a black belt, and white sneakers with red detail. He also has a light brown semi-long haircut.

He wears a long-sleeved shirt under his denim jacket, with spikes protruding from the shoulders, blue jeans with a black belt, and red and white sneakers. He lost a lot of weight in the game and has a costume called "Other Shirt".

His alternate outfit is a basic navy-blue worker's shirt with a pair of black jeans and cowboy boots. In the Xbox 360 version, Axel sports mutton chops when wearing this outfit.

Axel wears a purple track jacket, black shoes and a black band on his head. Aside from that, he does not look much different from his Guitar Hero II incarnation.

Axel wears a denim vest over a leather jacket and a T-shirt. He also wears basic denim pants slashed at the thighs with a belt and hi-top basketball sneakers.

This outfit is a tribute to the late Pantera guitarist "Dimebag" Darrell Abbott. Axel wears a buttoned-up vest, cargo shorts, wristbands, a pair of high-top skate shoes and quarter cut black socks just above them. In addition, he also sports a long goatee (with the exception of the "Brown Vest" palette). He wears a trucker's cap in the Xbox 360, PlayStation 3, PC, and Mac versions, and in all versions of Guitar Hero: Aerosmith. In the Wii and PlayStation 2 versions of Guitar Hero III: Legends of Rock, he wears no cap.

Axel wears the "Black Vest" style from his "Shorts" outfit in Guitar Hero III: Legends of Rock, except his shoes are changed.

Axel wears the "Black N Blue" style from his "Jeans" outfit in Guitar Hero III: Legends of Rock but his shoes have black detail. He also appears as the drummer in the game's cutscenes.

Axel has four alternate attires in the game. Three of them can be unlocked after beating certain challenges with the correct instruments. Unlike the previous band entries, his outfits cannot be changed. Instead, his clothing pieces can be unlocked for use on custom characters.

Axel wears the exact same outfit from Guitar Hero World Tour except he wears Rings on the left arm instead of Diamond Head.

In Band Hero, Axel's appearance is greatly different from his previous appearances. But his first three outfits as seen in GH5 (Stormbringer, Shoulder Blades, & Hog Wild) appear in this game.

Axel becomes a mummy with his skin destroyed, leaving only his spine visible from the chest down. Axel's guitar, Sacryfyce, resembles a Gibson Flying V with a pyramid-like design.

While not appearing in the game physically, Axel's name is shown to be one of the nine opponents in GHTV's Premium Shows.

The game manual for the PlayStation 2 version of Guitar Hero II contains an interview with Axel. The following text is taken directly from the manual.

We had a chance to sit down with hard-rocking Axel Steel, one of the stars of Guitar Hero II and ask him a bunch of questions! We were able to meet up with Axel at an all-night diner after one of his shows.

GH Magazine: Thanks for taking the time to do this; I know how busy you are.

Axel Steel: No problem, the smells from that tour bus were starting to get me.

GHM: What kind of music are you listening to now?

AS: There's this new type of metal out of Norway which, like takes metal and smoothers it with a gooey layer of more metal, sprinkles it with bits of metal with and roasts it on an open fire until it's cooked all the way through.

GHM: Sweet. So when did you first pick up a guitar?

AS: I can't remember the exact age, but I was young. I remember seeing this rock band play down the road. They were so loud, they had so many chicks, and they wore so much denim that I was instantly hooked.

AS: Well, we decided to do things a bit different this time. We had the cover art done first, and now we're going back and writing songs based on it... it's going slower than we thought it would.

AS: It involves a snake somehow holding a machine gun... and he's shooting all these monsters, but the monsters are like smiling...like they like it... yeaahhhh!

At that point in the interview Axel saw his tour bus taking off down the street and he took off chasing after it.

The player can earn up to two Ankhs that will revive him/her with the rock meter in the yellow section should he/she fail the song. Any Ankhs left over when the song ends will be converted into one power star each.

The player can now earn up to five Ankhs rather than two.

Axel as he appears in the first game

Axel Steel (right) on the cover of GH2 with Judy Nails

Axel as he appears in GH2 (default "Shirt" outfit)

Axel as he appears in GH2 ("Other Shirt" outfit)

Axel as he appears in GH Rocks the 80s

Axel as he appears in GH3 (default "Jeans" outfit) 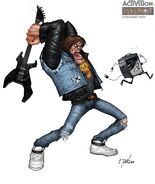 Concept art for Warriors of Rock

Concept art for Warrior form in Warriors of Rock