Edit
watch 01:36
We're Getting Mutants in the MCU - The Loop
Do you like this video?
Play Sound
Band Hero 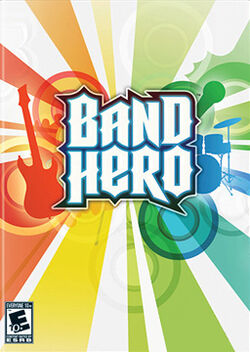 Band Hero is a spin-off title to the Guitar Hero series of music video games, published by Activision on November 3, 2009 for the PlayStation 2 and 3, Wii, Xbox 360 and Nintendo DS consoles. The game is structurally similar to Guitar Hero 5, supports full band play (lead and bass guitar, drums, and vocals) including the drop-in/drop-out and in-song instrument and difficulty change menus, and additional multiplayer modes as Guitar Hero 5. Unlike the main Guitar Hero games, where the focus is on the lead guitar portions of the songs, Band Hero provides a soundtrack more oriented towards pop rock to challenge the whole band.

According to Jeff Gerstmann of Giant Bomb, the game, from its first trailer, appears to be functionally similar to the feature set for Guitar Hero 5, including bands comprised of any combination of four instruments, drop-in/drop-out play, in-song menus to change difficulty and instrument, and additional multiplayer modes compared to Guitar Hero 5's "Rockfest".

The game also supports up to four player multiplayer in a similar manner as Guitar Hero 5 using the DS's local wireless connections, allowing any combination of instruments. However, there is no support for the Nintendo Wi-Fi Connection nor plans for additional downloadable content for the Nintendo DS game.

Band Hero for the Nintendo DS features the ability to play the same instruments as the console-based versions. Though the game is compatible with the Nintendo DS, DS Lite, and DSi, only players that have the Nintendo DS Lite will receive the "full band" experience due to the nature of the hardware extensions for the unit.

The Guitar and Bass parts will be played with the same "Guitar Grip" previously created for the Guitar Hero: On Tour series, though this unit will not work on any of the Nintendo DSi and Nintendo 3DS models due to lack of a GBA slot. The gameplay for guitar and bass is considered to be the fourth iteration of the Guitar Hero: On Tour design by developers Vicarious Vision, and have further improvements to meet with different strumming styles.

A new "drum skin" that fits over the bottom half of the DS unit will provide four "pads" for drumming that map to the unit's directional pad and face buttons; this design was selected over use of the touch screen due to the inability of the touch screen to recognize near-simultaneous taps, a factor that would have interfered with the drumming experience. The drum skin is limited to the Nintendo DS Lite due to the skin's form factor. Unlike the original drumset for the console version of Band Hero, the DS version has Green, Red, Yellow, and Blue. The decision to design towards the DS Lite rather than the newer DSi was due to the much larger volume of DS Lite units that have been sold relative to the DSi.

The Nintendo DS's built-in microphone is used to play Vocals.

Many songs that appear in Band Hero are pop rock songs catered towards the younger audience. The console version has a total of 65 songs and 50 of these songs are exportable to other games Guitar Hero 5 while this game can also import songs from Guitar Hero World Tour and Guitar Hero: Smash Hits with a small fee. The Nintendo DS version has 30 of the 65 on-disc console songs and each region has their own selection of songs exclusive to those regions.