Similarly to regular Guitar, the highway is made up of five targets and the note to be played must be matched with its respective target. Bass guitar is used to keep the rhythm of a song so the player will encounter the same beat. Unlike guitar, bass guitar is less likely to contain chords though some of higher tiered songs do contain chords. Tap notes and extended sustains are still part of bass.

In Guitar Hero: World Tour and onwards a new type of note is present: the open note. The open note is a horizontal purple line in appearance, and spreads across the highway. Because it doesn't match up to a target, the open note is played without holding any fret buttons. Open notes can also be pulled-off. Pull-off open notes glow white, like all hammer-on/pull-off notes. The open note can be considered the easiest type of note to hit but can be difficult when played along with regular colored notes.

An open note about to be played

An open sustain about to be played 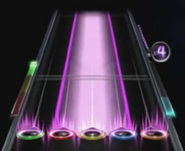 An open sustain being played

An open sustain with Star Power