Cliffs of Dover By Eric Johnson is a subtle song, but considered to be one of the most amazing songs in the game, being an incredible song overall with a very catchy melody and a blast to play. The song is in swing, meaning that eighth notes are two tied triplets followed by the third triplet, but are written as normal eighth notes. There are three solos in the song, one as the intro, one in the middle of the song, and one at the end.

The first solo consists of long strings of Hammer-on notes, and a part that is almost impossible to Full Combo without tapping (called "Intro Solo B," it consists of repeated orange HOPO's, like O B O Y O R O G O R O Y O B O Y O R O G, etc). One technique is to make sure you hit both star power sequences in Intro Solo A and simply hit orange activating star power at the beginning of Intro Solo B. Star power will luckily last until the end of the "reverse TTFAF" section and you should be able to save star power as the verse and chorus are relatively easy. The second solo is somewhat easier, but also has a tapping part. It then goes smoothly from there. Cliffs of Dover is thought by many to be the easiest song in the 8th tier, so it is often said that it would fit better in the 7th tier.The part of the first solo with the repeating orange note pull-offs was achieved on real guitar by hybrid picking. While one strums, one picks another string with a different finger. Basically, Cliffs of dover is a Great but difficult song to play. Study the instructions above and practice a lot. This, along with Impulse are the only on-disc songs in GH3 in which the singer is not onstage. 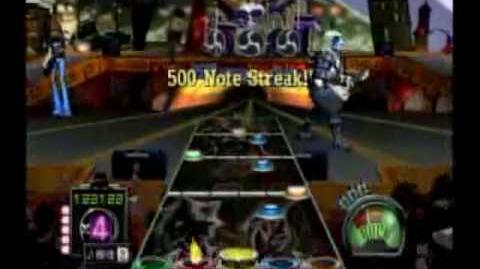