Clive Winston is a character in Guitar Hero, Guitar Hero II, and Guitar Hero World Tour. He first appeared as one of the six regular characters in the first game, with a 1960s mod/psychedelic style. In the second game, he became an unlockable character, along with Xavier Stone and Grim Ripper. This game gave Clive a completely revamped look, as a 1970s rocker with long hair and a large mustache.

Clive Winston was born into unremarkable circumstances in the outskirts of London. His childhood and education were typical, and at university, a professor described him as "un'extraordinary in every way." His grades were average. But Clive soon proved he was anything but average. He formed the hard-rocking Winstons and released single after chart-topping single. The recent "Clive Alive 2005" tour was a mega-success. Clive's super-virtuosic style is a throwback to the British guitar gods of the 70s. His biographer revealed that on any given day, Clive plays guitar for at least eight hours, hitting approximately 36,000 notes, while only speaking an average of 50 words. The most sought after session player working today, Clive's name graces more CD credits than we can count. - Guitar Hero manual bio

Inspired by the 70s British guitar gods, Clive Winston is a precious session commodity - everything he plays on goes gold. He's got a unique and virtuosic guitar style and knows just how far you can bend a string before it breaks. -- Guitar Hero, Guitar Hero World Tour, and Guitar Hero: Metallica in-game bio

Having abandoned his fascination with the sitar, an interest developed during a 3-year, court-ordered "meditation retreat", Winston sashays boldly back to the forefront of classic rock with his guitar wizardry and iconic status. -- Guitar Hero II in-game bio

During his latest tour, friend Eddie Knox was quoted 'Okay Clive, you finally got yer work visa. Now unless yer joining the police force, you gotta lose the stache, man'. To which Clive replied 'A big droopy moustache is the mark of a real man'. -Guitar Hero 5 in-game bio

Clive wears an open navy-blue jacket, decorated with a stars motif over his bare torso, embroidered bellbottoms in the same color and white shoes. His shades have a burgundy tint, and he also wears a white-and-red striped neckerchief and a necklace with the peace symbol.

Clive as he appears in the first game 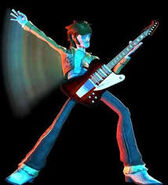 Render from the first game

Clive as he appears in GH2

In-game footage of Clive from GH2
Add a photo to this gallery
Retrieved from "https://guitarhero.fandom.com/wiki/Clive_Winston?oldid=40039"
Community content is available under CC-BY-SA unless otherwise noted.