View source
watch 01:36
We're Getting Mutants in the MCU - The Loop
Do you like this video?
Play Sound
Guitar Hero 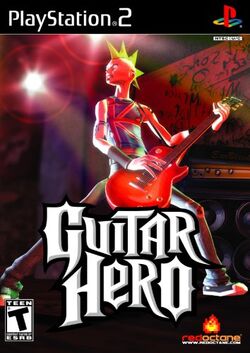 In Guitar Hero, players use the strum bar along with the fret buttons to play notes that scroll down the screen along a fretboard. The Easy difficulty only uses the first three fret buttons, that is, the green, red, and yellow. The Medium difficulty uses the blue button in addition to those three, and Hard and Expert use all five buttons.

A single note in Guitar Hero is worth 50 points. After a player correctly plays 10 notes correctly in a row, the score is multiplied by 2. This continues until a 4x multiplier is achieved. Star Power can double the score at any multiplier, and can bring the multiplier to its highest possible 8x. A single note would then be worth 400 and a chord worth 800.

Career mode is the primary mode of play on Guitar Hero. Players progress through the game by beating every song in a tier, then they play the encore song for that tier. Once the player has played every song in all six tiers (five in Easy), they have completed career mode.

Tutorials teach the player how to play the game. The tutorials will focus on the first three frets for the most part including the green note, red note, and yellow note.

The game features 47 playable songs; 30 of these tracks are covers of the originals. The additional 17 songs are by lesser-known groups. Many of these groups feature members of the Harmonix development team, while some are indie Boston area groups. Drist's guitarist, Marcus Henderson, provided lead guitar on 20 of the game's 30 cover tracks.

4. Return of the Shred

These can only be unlocked through the use of a PlayStation 2 cheat device, such as GameShark, CodeBreaker or Action Replay.

Guitar Hero was very positively received by many major reviewers. Jeff Gerstmann of Gamespot praised its set list and accessibility to newcomers.[1]