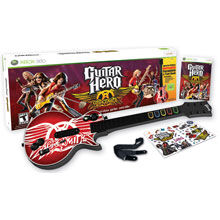 Guitar Hero: Aerosmith is a music video game by Activision and Neversoft. It was released on June 29th 2008 for the Nintendo Wii, Xbox 360, PlayStation 2 and PlayStation 3. It takes the player through the history of the band Aerosmith, and stopping off at real tour spots they went, like The Super Bowl in 2001.