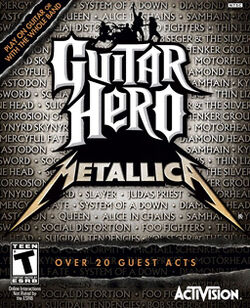 Guitar Hero: Metallica is a game in the Guitar Hero series that's based around the band Metallica. It was released on March 29th, 2009 for the Xbox 360, PlayStation 3 and Wii. It was released for the PlayStation 2 on April 14th, 2009. UK Release of all versions was 29th May 2009. Some UK stores (Chips) gave away Metallica Faceplates with the PS3, X360 and Wii Solus versions. This faceplate only fits the World Tour Guitar. Also available in the UK is a Solo Guitar Bundle, containing the game, a World Tour Guitar and separate Metallica faceplate.

Just like in World Tour, the player is able to play guitar, bass, drums, and vocals. Four players can play full band. There is 49 songs total, 28 which will be Metallica and the other 21 will be guest acts. Some of these songs (all of the Metallica songs) were exportable to other Guitar Hero games. This is the first game in the series to support Expert +, a new difficulty for drums. It allows players to use double bass kick pedals. All features that were available in Guitar Hero World Tour are available along with some new ones. The "Death Magnetic" is playable to those who downloaded it for the Xbox 360 and PlayStation 3. The Wii and PlayStation 2 versions of the game include "Broken, Beat & Scarred", "Cyanide", and "My Apocalypse" since they are not compatible with the Death Magnetic download.

On commencing Career Mode, a cutscene is shown of Metallica walking onto stage, accompanied by 'The Ecstasy of Gold' then straight into 'For Whom the Bell Tolls' and 'The Unforgiven'

Ian 'Lemmy' Kilmister from Motörhead and King Diamond are unlocked for players to select after their respective songs have been completed.

Members of Metallica are unlocked upon completion of their respective careers (Kirk for Guitar, James for Vocals, Robert for Bass and Lars for Drums)

Metallica roadie Zach Harmon is unlocked upon completion of Band career. Zach Harmon is the guy who gives James his guitar before playing "The Unforgiven".

Inspired after playing a Metallica concert, the player(s) start a band. After playing some songs and working their way up to fortune, they open for Metallica, while competing with an '80s glam rock band called The Poseurs.

The game includes 28 songs by Metallica, and 21 guest acts by bands which Metallica favored, inspired them, etc. In addition, user created songs could be downloaded, as well as created. Also DLC could still be purchased. However, as of 2014, songs can no longer be downloaded.

Retrieved from "https://guitarhero.fandom.com/wiki/Guitar_Hero:_Metallica?oldid=40225"
Community content is available under CC-BY-SA unless otherwise noted.