Edit
watch 01:36
We're Getting Mutants in the MCU - The Loop
Do you like this video?
Play Sound
Guitar Hero: On Tour 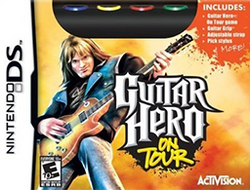 Guitar Hero: On Tour is the game for the Nintendo DS, released June 22, 2008. The game comes with a four-button fretboard attachment. The game features 26 songs: twenty-one songs exclusive to On Tour, and five from Guitar Hero III: Legends of Rock.

The gameplay in On Tour was designed to be similar to the home console games while still maintaining the portability of the Nintendo DS. The new Guitar Grip peripheral replaces the guitar controller of the home games with an adapter for older DS systems; it attaches to the DS's GBA slot and features four fret buttons. In order to strum, the player uses their stylus (a special pick-shaped stylus is included with the game) to strum the notes on the touch screen. Star Power is activated either by blowing or speaking into the DS's microphone, pressing one of the system's face buttons, or tapping the Star Power meter.

Returning characters are Pandora, Axel Steel, Judy Nails and Johnny Napalm along with two unique characters made specifically for Guitar Hero: On Tour, Gunner Jaxon and Memphis Rose. The game also features a redone version of the band you play seen in previous games. The Female Singer from previous games has been replaced by a different one, along with a new drummer, and The Singer replaces The Bassist.