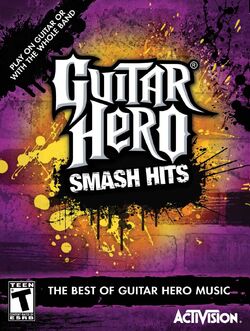 Guitar Hero: Smash Hits (titled Guitar Hero Greatest Hits in the European and Australian regions) is a music video game and the fourth expansion game to the Guitar Hero series. The game features 48 songs taken from 5 previous games in the series—Guitar Hero, Guitar Hero II, Guitar Hero Encore: Rocks the 80s, Guitar Hero III: Legends of Rock and one song from Guitar Hero: Aerosmith — redesigning the songs to be based on master recordings and to include support for full band play first introduced to the series in Guitar Hero World Tour. The game was developed by Beenox and published by Activision for release on the PlayStation 2, PlayStation 3, Wii, and Xbox 360 systems and was released around the world in the second half of June 2009.

The game reuses many elements from previous titles in the series, including Guitar Hero World Tour and Guitar Hero: Metallica. Beenox designed the game around playing the greatest songs of the series at venues located in the greatest places on Earth, and created venues based on various Wonders of the World for the game. While the game's soundtrack and expansion into a four-player band were well received by reviewers, the game was highly criticized for being a full-cost standalone title instead of being downloadable content for existing games in the series.

Guitar Hero: Smash Hits plays similar to Guitar Hero World Tour, featuring support for a four-instrument band: lead guitar, bass guitar, drums, and vocal. In addition to using master recordings for each song, the songs have been charted to use gameplay features introduced in World Tour including the open bass strumming & slider sections for intense solos using the touchpad on the guitar bundled with World Tour. Certain songs have been recharted or remixed to be more accessible to the full band; for example, "I Love Rock N Roll" includes a drum and vocals solo without guitar portions that were included in the original Guitar Hero, while the piano introduction in "Killer Queen" is played by the lead guitar player. The game borrows gameplay and graphical elements from Guitar Hero: Metallica, including the "Expert+" difficulty level using two bass drum pedals and the rearrangement of on-screen meters for band mode. Smash Hits includes a Music Studio creation mode and is compatible with the "GHTunes" custom song sharing service present in World Tour and Metallica. Smash Hits also includes all the game modes present in World Tour, including single player and band career modes, and the eight-player "Battle of the Band" mode.

The game presents a story sequence that ties in with the Career mode, as has been present in more recent Guitar Hero games. In Smash Hits, the players (Shown in cutscenes as Axel Steel on drums, Johnny Napalm on guitar, Lars Umlaut on bass and Casey Lynch on vocals) are challenged by the "God of Rock" to play at venues at various Wonders of the World in order to charge a power artifact; it is revealed later that the God of Rock is actually Lou, the Devil, in disguise seeking the power of the artifact, the real God of Rock trapped by Lou. The player's band is able to discover Lou's deception and free the God of Rock; the band then rejects the God of Rock's offer of ascention to immortality, instead wanting to return to Earth to continue to rock. After completing each venue, the players earn venue-specific clothing to customize their avatars. The career mode follows the same star-tier system used in Metallica, requiring players to earn a fixed number of stars to proceed from one tier to the next. As with Guitar Hero: Metallica, all songs are available to play in Quickplay mode without unlocking them through the career mode.

Paul Gadbois, developer at Beenox Studios, identified that their goal for the game was to focus on the music from the past games in the Guitar Hero series, and that the selection of the soundtrack was one of the core features they focused on first. Songs were selected based on several factors, including songs that were not formally available to Wii and PlayStation 3 owners, and songs that played well in both single player and band modes. They also thought of playing the "greatest songs" in the "greatest places", and developed eight new venues based on Wonders of the World, including "Amazon Rain Forest", "The Polar Ice Caps" and "The Grand Canyon". The team opted to reuse the original Guitar Hero characters instead of attempting to bring in musical celebrities as was done in Guitar Hero World Tour and Guitar Hero: Metallica, fearing that the star power would have outshone the music selection. Beenox performed all of the major development efforts, including designing the venues, selecting the songs, and creating the note tracks, though Neversoft provided their own development tools and provided Beenox with their own insight from developing the other Guitar Hero games in the series. While the Beenox developers were provided with the note charts from the songs in their original games, they only looked at these after developing new charts for the songs on their own, and modified their new charts to accommodate sections from the originals that made them fun to play in the first place.

The game's full setlist was revealed over the course of April and May 2009 by allowing users to vote on the order of the remastered tracks from the four previous games.

In North America, various retailers provided pre-order incentives for those who reserved Smash Hits. Gamestop and EB Games gave away a pair of branded drumsticks with the game. Best Buy provided a discount towards any Guitar Hero World Tour-related product with pre-orders of the game, and provided a limited supply of extra drum bass pedals for the "Expert+" mode with purchase of the game. Game Crazy offered exclusive cheat codes as their incentive.

There are eight venues you can perform at, most of them have to do with wonders of the world. You unlock new venues in career mode by earning a certain number of stars in songs from the previous venue(s).

Retrieved from "https://guitarhero.fandom.com/wiki/Guitar_Hero:_Smash_Hits?oldid=39911"
Community content is available under CC-BY-SA unless otherwise noted.