Edit
watch 01:36
We're Getting Mutants in the MCU - The Loop
Do you like this video?
Play Sound
Guitar Hero: Warriors of Rock 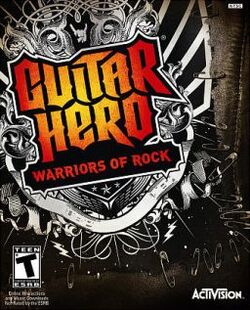 Guitar Hero: Warriors of Rock (also known as Guitar Hero 6 or GH6) is the sixth main entry in the Guitar Hero series and was released on September 28, 2010 for Xbox 360, PlayStation 3, and Wii consoles. It is the last Guitar Hero game developed by Neversoft since the sales for rhythm game markets dropped rapidly from 2009.[1]

As with previous games in the series, Guitar Hero: Warriors of Rock lets up to four people play in a band on vocals, lead and bass guitar, and drums, to successfully match notes as they scroll down the screen. Official Xbox Magazine (UK) noted that the only change to the core gameplay appears to be the addition of a sustained open-string bass note that was lacking in Guitar Hero 5.

The major game mode in Guitar Hero: Warriors of Rock is called "Quest Mode", which will be narrated to the players by Gene Simmons. Quest Mode is a career mode where the players attempt to complete songs and challenges to advance the story and game. It is based on a story where the players of the band are attempting to release the "Demigod of Rock" and his guitar from imprisonment by "The Beast", gaining strength through bringing new members to the band. While all four instruments can be played solo in Quest Mode, or any combination of instruments can be played as a Band, the game was made with an emphasis on the Guitar. As such, the difficulty curve on any instrument other than the Guitar is rather inconsistent.

The Quest Mode culminates into a story section loosely based on the song "2112" by Rush, playable in its entirety within the game, where the player finds the Demigod's guitar and uses it to overcome the Beast. These elements will be narrated by Rush members Neil Peart, Geddy Lee and Alex Lifeson using the "2112" album's original liner notes.

Gaming journalists have noted thematic similarities between the story details of Warriors of Rock and Brütal Legend, an action video game with a world based on heavy metal developed by Tim Schafer and Double Fine. Activision at one point were to have published Brütal Legend but later dropped the rights. Project lead Brian Bright commented that their inspiration for the game's story was the covers of metal albums, the same material that led to the world of Brütal Legend.

Due to legal issues with the likenesses of musician celebrities in Guitar Hero 5 and Band Hero, Guitar Hero: Warriors of Rock features only fictional characters, those previously included in the series. As part of Quest Mode, players unlock these characters by completing specific songs which can also unlock alter-egos for each character that have further influence on the game. One example is the character of Lars Umlaut, who can become "Warrior Lars" on completing his challenges, allowing for a maximum 6x scoring multiplier instead of a 4x multiplier. The game includes a perk system comparable to Call of Duty: Modern Warfare, in which the player can select two of any of the unlocked play bonuses for future songs. With the combination of these bonuses, it is now possible to score up to 40 stars per song instead of the usual 5 stars. In addition, all venues are now fictional except for the now-defunct CBGB Club in New York City. Some venues are based on Rush's "2112" song, including the caves where the player finds the Demigod's guitar, and a venue based on the "Starman" emblem used on the 2112 album.

"Party Play", where the game automatically plays songs and allows for players to jump in at any time, remains in the game. The game also includes an improved "Quickplay+" mode to play any of the in-game songs or downloadable content (DLC) directly. Quickplay+ mode also includes some of the features from Guitar Hero 5's Career mode, such as song challenges that are otherwise not incorporated into the Quest mode. Each song, both on-disc and DLC, has thirteen different challenges to be completed. Players have the opportunity to use the unlocked Warrior form of the game's characters within Quickplay+ mode in order to take advantage of their gameplay benefits as necessary to complete some of these challenges. The competitive modes introduced in Guitar Hero 5 also carry over into Guitar Hero: Warriors of Rock. The Wii version improves the "Roadie" game version introduced in Guitar Hero 5. In this mode, up to four additional players with their own Nintendo DS wirelessly connected to the Wii (the "Roadies") can assist the other players using instrument controllers. The Roadies can create setlists from the DS, or engage in gameplay through "spells" that improve the performance of the player they are assigned to. Alternatively, in Roadie Battle mode, the Roadies can attempt to distract another player while at the same time removing the distractions placed on their player by another Roadie.