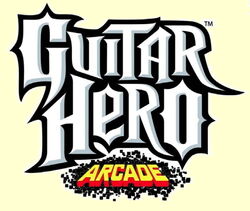 Activision and Konami, who have previously worked together to make sure that the Guitar Hero series meets with Konami's patents on music games, developed an arcade console version of the game, titled Guitar Hero Arcade, distributed to arcades in early 2009. The game is primarily based on the Guitar Hero III: Legends of Rock gameplay, reducing some of the features such as character customization, but keeping the ability to download new songs for the cabinet from the Internet.

Guitar Hero Arcade
Add a photo to this gallery
Retrieved from "https://guitarhero.fandom.com/wiki/Guitar_Hero_Arcade?oldid=39773"
Community content is available under CC-BY-SA unless otherwise noted.