Edit
watch 01:36
We're Getting Mutants in the MCU - The Loop
Do you like this video?
Play Sound
Guitar Hero Encore: Rocks the 80s 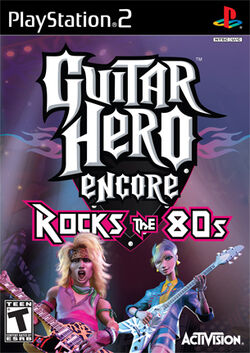 Guitar Hero Encore: Rocks the 80s (titled Guitar Hero: Rocks the 80s in Europe) is a music video game and the third installment in the popular Guitar Hero series. It was released in July 2007 in North America and Europe, and in August 2007 in Australia.

Players use a guitar-shaped controller (purchased separately) to simulate playing rock music by hitting notes as they scroll towards the player. Rocks the 80s is considered a spin-off title in the Guitar Hero series, rather than a full sequel. No changes in gameplay from Guitar Hero II have been introduced to this game except for the lack of lead guitar and rhythm guitar co-op tracks. As implied by the game's title, the game features a 1980s theme, consisting of songs from the decade and playable characters, fashions, and artwork that reflect the time period.

The game was not as well-received as the prior two Guitar Hero games, due to the lack of new gameplay features and reduced soundtrack. Rocks the 80s is the third and final title in the Guitar Hero series to be developed by Harmonix before they moved on to create Rock Band. The next major installment of the series, Guitar Hero III: Legends of Rock, was developed by Activision's Neversoft division.

Guitar Hero Encore: Rocks the 80s was initially announced by EGM in January 2007 as: 1980s Edition. Orange Lounge Radio claimed that the game would be released in June 2007, based on an Activision announcement, though no other source has cited this announcement. Activision officially revealed the first details of the game May 11, 2007, in addition to changing the game's title to Guitar Hero: Rocks the 80s. Only a few weeks later, the game name was revised again as Guitar Hero Encore: Rocks the 80s, as official artwork for the game was first released. Nevertheless, the word 'Encore' has been dropped from the title of the European releases. Interestingly enough, the main menu of the NTSC version does not display this either.

The mechanics of the game are nearly identical to that of its predecessor, Guitar Hero II; an early preview of the game described it as "more like an expansion pack for Guitar Hero II than a new game in its own right". Major differences to Guitar Hero II are mostly aesthetic and the lack of lead guitar and rhythm guitar tracks in co-op mode.

Six characters from previous Guitar Hero games (Johnny Napalm, Judy Nails, Izzy Sparks, Pandora, Axel Steel, and Grim Ripper) return with character designs influenced by styles of the 1980s. Venues from Guitar Hero II (with the exception of RedOctane Club and Stonehenge, which do not appear, and the Vans Warped Tour, which has been rebranded as the Rock For Safety Tour) have been redesigned with an 80s influence, and the interface mimics Guitar Hero II's, only with color changes (no "new" graphics were developed as far as the interface).

All of the tracks, excluding "Because, It's Midnite", were released during the 1980s, as the game's title suggests; "Because, It's Midnite" was performed by the fictional "80s hair metal" band Limozeen from the Internet cartoon Homestar Runner and was recorded in 2003. Two songs were originally written in the 1970's, but were covered by bands in the 1980's. These songs are "Radar Love" by Golden Earring, but covered by White Lion and "Ballroom Blitz" by Sweet and covered by Krokus. The song list includes tracks such as "Round and Round" by Ratt, "Metal Health" by Quiet Riot, "Holy Diver" by Dio, "Heat of the Moment" by Asia and "Nothin' But a Good Time" by Poison. Five of the songs are master tracks: "Because It's Midnite" by Limozeen, "I Ran (So Far Away)" by A Flock of Seagulls, "The Warrior" by Scandal, "I Wanna Rock" by Twisted Sister, and "Electric Eye" by Judas Priest, while the rest are covers.

The final setlist was revealed by GameSpy on June 28, 2007 as listed here. Unlike previous Guitar Hero games, there are no bonus tracks in Guitar Hero Encore: Rocks the 80s.

Bow Wow Wow's "I Want Candy" was originally announced for the game and appeared in many preview builds. However, RedOctane announced that it would no longer appear in the final version. No official comment about why the song was removed was ever given, however it is speculated that the band disliked the cover of the song that appeared in the game.

Currently, Guitar Hero Encore: Rocks the 80s holds a score of 18 out of 25 at Metacritic.com. The following are some scores by major gaming magazines and websites:

The most common criticism leveled at the game is the quality of the setlist, the high price ($49.99) of what many felt was a half-hearted expansion pack, and the relative lack of bonus content.