Edit
watch 01:36
We're Getting Mutants in the MCU - The Loop
Do you like this video?
Play Sound
Guitar Hero II 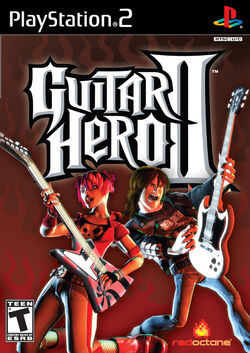 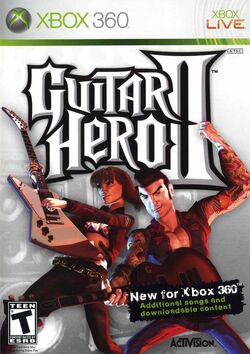 Guitar Hero II is the second entry of the Guitar Hero series developed by Harmonix and published by RedOctane for the PlayStation 2 on November 7, 2006. An updated Xbox 360 version was published by Activision on April, 2007.

Gameplay is the same of that of the original Guitar Hero. Player can use either use a guitar controller or a gamepad (DualShock 2 or Xbox 360 controller) to hit notes that cross targets at the bottom of a fretboard. Hitting notes consists of using colored frets on the guitar controller to target notes on the in-game fretboard. There are still four difficulties including Easy, Medium, Hard, and Expert. Each difficulties range in the number of frets used. Easy uses the first three, medium uses the first four, hard, and expert uses all five.

While retaining the original gameplay style, there were several improvements and new features added to Guitar Hero II since Guitar Hero.

Guitar Hero II features more songs than the first Guitar Hero game. These songs are placed on a scale of difficulty easy songs like Shout at the Devil, and Mother are at the top, while more difficult songs are at the bottom. Examples of these are Hangar 18, and Free Bird.