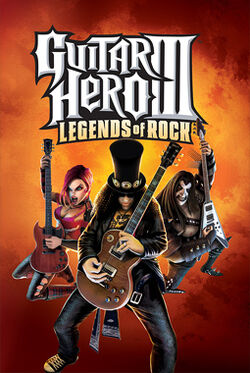 Guitar Hero III: Legends of Rock uses much of the same gameplay as the previous titles in the series. The game features a more realistic guitar controller.

Some changes have been made to gameplay from previous titles.

Compared to its main predecessor Guitar Hero II, the gameplay in Guitar Hero III: Legends of Rock feels smoother and more stable, and it is much easier to play songs in Guitar Hero III rather than in the previous entries of the series. The timing for hitting notes has been increased meaning players can be less accurate and still hit notes and this is especially noticeable on hammer-on and pull-off notes.

As for the whammy bar, previous entries of the Guitar Hero series had issues registering the whammy when it was already pressed down right before a long note and this issue was fixed in Guitar Hero III: Legends of Rock.

All console versions (excluding PC and Mac) feature wireless controllers. The PlayStation 3 and Xbox 360 versions both use a black Gibson Les Paul controller, but some Xbox 360 versions included Guitar Hero II's X-Plorer controller. The Wii version controller is a white Gibson Les Paul, and it features a slot for the Wiimote and utilizes the remote's internal speaker and rumble feature. The PlayStation 2 version of the game comes bundled with a Kramer Striker controller. The PC and Mac versions can be played with either the keyboard or the Xbox 360 X-Plorer, since the latter utilizes wired USB capability.

In Career Mode, there are three boss battles: Tom Morello, Slash, and Lou. These special battles will happen before the encore of their respective venue, with the exception of Lou, whose battle is slightly different. If the player manages to survive the whole song but cannot defeat the boss, Sudden Death mode will activate, and the player will lose. When the player defeats a boss, they will play an encore with said boss. The exception to this is Lou, who must be "finished off" upon defeat. During this time, Lou will be unable to play, and the player must play the end of "The Devil Went Down to Georgia".

Neversoft lead developer Alan Flores revealed that Guitar Hero III has a cast of thirteen characters. Characters returning from previous titles are Johnny Napalm, Judy Nails, Axel Steel, Izzy Sparks, Casey Lynch, Lars Ümlaüt, and Xavier Stone; Midori is an original playable character who can be selected. Additionally, each version of the game has two additional playable characters who can be unlocked: the Wii and PlayStation 2 versions include Metalhead and Elroy Budvis, while the PlayStation 3, Xbox 360, PC, and Mac versions include the God of Rock and the Grim Ripper.

In addition, the player can unlock three bonus characters through Career mode boss battles: Tom Morello, Slash and Lou the Devil. Bret Michaels appears in the game and sings specific songs, but he is not a playable character in the game without the use of a cheat code (Exclusive to the Playstation 3 and Xbox 360 Versions.). Michaels is only present when playing Talk Dirty to Me or Go That Far on all versions of the game, replacing the traditional vocalist. With the use of a cheat code, however, he can also sing any other song in the game on all consoles except the PS2 and Wii.

Guitar Hero III: Legends of Rock features 73 playable songs; 42 are part of the main setlist, 6 are exclusive to the Co-Op Career mode, and the remaining 25 are bonus tracks. In total, 54 of the game's songs are master recordings.

Guitar Hero III also supports downloadable tracks for the Xbox 360 and PlayStation 3 versions; several free and for-cost downloadable songs and song packs are available on both the Xbox Live Marketplace and the PlayStation Store.

While the Windows and Mac OS X versions do not have downloadable tracks support, the Guitar Hero gaming community have created third-party mods/software to import any charted song into the game or change the game's setlist.