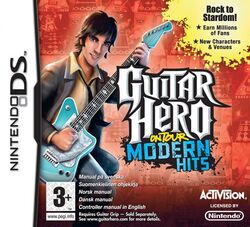 Guitar Hero On Tour: Modern Hits is for the Nintendo DS. It is the second sequel in the On Tour series. It is made up of popular modern songs.

The game was announced on March 5, 2009. There aren't many big changes in gameplay, although Vicarious Visions stated that they worked on the strum mechanics. It will include a new single-player career mode using "fan requests" to create a new non-linear progression through the songs in the games. Fan Requests are objective-based scenarios in which the player must achieve a certain goal, usually in Points, Stars, Percentage, etc. These were added to help move from gameplay that was "just going, playing a venue, and then moving on to the next one" and instead to "open the world up".

In Modern Hits, rather than finishing 5 songs from one venue and going to the next stage, you must complete a certain amount of songs from any area (granted you haven't already completed the song), including Fan Requests, to proceed, with each stage being visited twice (once for an opening act, and once as the headliner). Each song has three Fan Requests: Lead, Bass, and Guitar Duel. The female singer was changed again. She is now a slightly darker-toned African-American woman with her hair pulled back into a ball. The five venues include Rusty Rocco's, the County Fair, the Laser Lights Show, Casino Vicarious, and Shanghai, China.

The game's theme appeared as a free DLC for Guitar Hero World Tour and Guitar Hero 5 (all systems).

1. Rusty Rocco's - an old factory that has been converted into a night club. It is the first venue.

Appearance: A large moving platform suspended just above the floor for a stage, various gears and scrap metal lying around. Lava pours out of various spots in the building to create "rivers". A large banner above the stage reads "Star Power" and fans can be seen on various platforms in front of the stage.

2. County Fair - a large county fair with bright lights and various attractions. This is the second venue.

Appearance: The stage consists of three main parts: Two lower-level platforms for the guitarist and singer, and one upper-level platform for the drummer. A roller coaster ducks straight under the drummer's platform. A Strength Test game is seen near the guitarist, and a Swinging Pirate Ship ride is seen immediately behind the stage. Balloons will fly from below the stage occasionally during the song. The floor is littered with paper and trash, and appears to be part of a boardwalk.

Appearance: Two large laser prisms are seen on either side of the stage, one blue, the other green. Fans are on the ground in front of the stage, restrained by fences and in two square-shaped areas, with a path down the center. Various blue-and-green lights can be seen everywhere, and laser spouts are set off at various points in the performance.

4. Casino Vicarious - A modern, Egyptian-themed casino. It gets its name from one of the companies involved in the making of Guitar Hero, Vicarious Visions. This is the fourth venue.

Appearance: A massive Egyptian statue and three obelisk-design slots in the background. A stage with red carpet flooring and metal walls. Miniature waterfalls pour out of the walls of the stage, and into a large pool in front of it. Fans are standing on a platform across the pool. In the far background, you can tell that there are modern buildings, such as apartments, nearby. Firework-like explosions will go off at various points in the song.

5. Shanghai - a large temple in Shanghai, China. This is the fifth and final venue in the game.

Appearance: Paper lanterns are scattered everywhere, with fans swarming around below them. The edges of the temple's roofs have neon-green lights on them.Two dragon statues reach up to the top of the first roof, which is used as a stage for the performance. The heads of these dragons are right behind the guitarist and singer. A large, center lantern is seen suspended by golden support beams right behind the drummer, whose platform walls have dragon images flashing on them, heading toward the center.