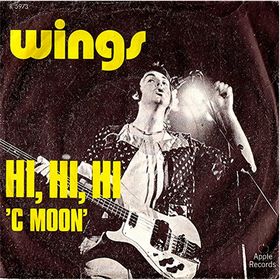 "Hi, Hi, Hi" is a song written by Paul and Linda McCartney and performed by Wings. It was released as a double A-side single with "C Moon" in 1972. The song was recorded around the same time as "C Moon", in November 1972. It appears as DLC and Part of The Wings Track Pack In Guitar Hero World Tour.

In the UK, the song was banned by the BBC for its sexually suggestive lyrics. The BBC also assumed that the title phrase, "We're gonna get hi, hi, hi" was a drug reference. The specific lyrics objected to is the apparent phrase "get you ready for my body gun"; McCartney has said that the correct lyrics are "get you ready for my polygon", an abstract image, and later said, "The BBC got some of the words wrong. But I suppose it is a bit of a dirty song if sex is dirty and naughty. I was in a sensuous mood in Spain when I wrote it."

Retrieved from "https://guitarhero.fandom.com/wiki/Hi_Hi_Hi?oldid=34229"
Community content is available under CC-BY-SA unless otherwise noted.