English
Johnny Napalm is a main character in the Guitar Hero series. He is one of only a handful of characters to appear in every game in the series, a distinction only shared with Axel Steel and Judy Nails. He represents the punk genre in all games and is featured on the cover of the first Guitar Hero.

Johnny Napalm is depicted as a tall, slim, and lanky character. His hair is typically fashioned in a mohawk, and its colors and styles vary depending on the game.

Johnny wore a sleeveless, ripped Union Jack shirt, ripped blue denim pants and navy-blue sneakers. His mohawk is green and spiked, and he has a soul patch.

Johnny wears a yellow sleeveless T-shirt with a radioactive symbol in black that takes up the whole space of the shirt. He wears blue jeans torn up just below his knees, green socks and black sneakers with a pattern of skulls.

Johnny wears a khaki jacket with a mesh shirt and a T-shirt combined underneath, on which the anarchy symbol is represented, black fingerless gloves, a bullet belt around his waist, blue denim pants and combat boots. On the back a white patch is shown on with bombs on it and featuring the name 'Napalm' As the name implies, his hair is styled in liberty spikes instead of a mohawk. In both outfits he has a soul patch.

In this game, Johnny's hair is styled differently: he sports a McSqueeb, a hair style popularized by Tony Hawk. He wears a studded choker around his neck and a red sleeveless shirt, on which the anarchy logo appears silk-screened, as noted by the uneven shade of red around the logo. He wears blue denim shorts and red sneakers.

Johnny's hair is a spiked mohawk again, but much longer than in the previous games. He appears shirtless, with many new tattoos on his arms and torso (notably the word "ROTTEN" above a biohazard symbol on his navel), but wears ripped denim pants with chains dangling from it and "creeper"-style sneakers with liner length black socks above them, visible if his left shoe (the shoe on the viewer's right) on his GH3 concept art unlockable in Quickplay+ on Warriors of Rock is looked at closely enough. He has a leather band on the left wrist and a sweatband on the right.

Johnny's leather jacket served as his only shelter when he was living on the street in '82. But it was cool. He was able to save money to buy enough hair products to maintain a killer sky-high mohawk. - Shop description.

Johnny's hair is a foot-long straight mohawk. He wears a studded leather jacket with the shoulders torn over a ripped undershirt, a chain necklace with a padlock, patched-together zipper pants and a pair of combat boots, with spikes on the right one.

In his "Formal Wear" outfit Johnny looks the same as he did in GH3, but with different tattoos and no Union Jack Logo on the pants

His "Ink" outfit has a green Mohawk (spiked in liberty spikes) with blue on the end, and is covered in tattoos all over his arms, back, and chest.

His "Anarchy" outfit has him dressed in brown pants, blue Mohawk (once again spiked in liberty spikes), and a black sleeveless shirt with a white anarchy logo on it. It's also a reference to the Sex Pistols song, "Anarchy In The UK" which is a playable song in Guitar Hero 3.

Burnt Udon: His new appearance looks much different than his previous ones, as now he sports a more casual style, but still retains his punk reputation. His hair blonde and spiked into individual spikes in a style appropriately called "All Product, No Egg". He wears a black and white striped long-sleeved shirt with the sleeves rolled up to his elbows under a tan short sleeved shirt with several military patches on it, accessorized with a red skinny tie. He wears this along with jeans and white sneakers. He has a white wrist band with blue and red stripes on his right arm. In this version, he looks significantly older and sports many tattoos. His alternative outfit looks more similar to his signature look; he has a thick blonde mohawk with the ends dyed orange and a sleeveless black shirt over an orange one.

Guitar Hero Warriors of Rock- Warrior Form His Warrior form gives him the appearance of a blue hobgoblin. He has spikes on his forearms and biceps. He has a studded leather vest and tight black jeans. His mohawk is made of steel spikes and he has red glowing eyes. And he has two spikes coming out of his ears. He also has a lock collar in his neck. He has claws, similar to Wolverine's.

Johnny was born and raised in East London, the source of his Cockney heritage. His father, Eggy, was one of the original Hair-Punks of London in the late 70's. He was previously in a band called I Can't Believe You're Going Out Like That, You Look Ridiculous!

According to an excerpt from the original Guitar Hero’s manual, his social worker claims that, "he doesn't play well with others." In Guitar Hero III, his Mohawk description states that, “[his] leather jacket served as his only shelter when he was living on the streets in '82.”

In addition, excerpts from Guitar Hero: Aerosmith hint that he hangs out with Judy Nails and has a romantic relationship with her.

The score multiplier goes no lower than double points (2x). Keeping the multiplier above triple points (3x) will grant up to two power stars.

The multiplier now increases after a note streak of five notes rather than ten. Keeping the multiplier above triple points now grants up to five power stars.

Johnny Napalm on the cover of the first game

Johnny as he appears in the first game

Johnny as he appears in GH2 (default "Mohawk" outfit)

Johnny as he appears in GH2 ("Liberty Spikes" outfit)

Johnny as he appears in GH Rocks the 80s

Johnny as he appears in GH3 (default "Liberty Spikes" outfit) 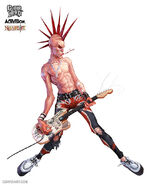 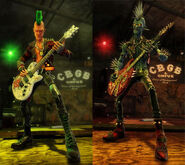 Johnny in his Warrior form