Hearts floating around a spider walking on its web (GH1)
Hearts and cartoonish skulls scattered all around (GH2, GH80s)
A snake coming out of a winged skull and weaving around a female demon head (GH3, GHA)
Goth Highway (GHWT, GHM, GHSH, GHVH)

Judy Nails is a playable character in the Guitar Hero series. Since her first appearance, she has appeared in all six main games in the series. She appears to be inspired by Miki Berenyi (Lush), although other sources indicate she may be based on Judita Wignall, of Halo Friendlies and Scouts Of Saint Sebastian (whose song "In Love" is featured in Guitar Hero III: Legends of Rock).

Judy Nails - Rock Goddess. Born Judith Ann Taylor, she earned her nickname at the age of 7 in a nail gun incident. It was a formative experience in unconventional behavior. Her parents tried to push a variety of "acceptable" pursuits, but by 12 it was obvious Judy had only one love: ROCK N' ROLL. The alternative rock scene was her inspiration and salvation. She took her guitar, the cash from her mother's purse, and formed the Nail Gunners. Judy is known for her experiments with non-standard tunings and jaw-dropping solos. In a recent court-room appearance, Judy defended herself against charges that she struck a reporter, saying "He had asked about my hair and clothes, and not once about my music." The charges were eventually dropped. Rock on, Judy. - Guitar Hero manual bio.

A fan of distorted feedback and roller derby, Judy Nails has been a pioneer of alternative rock since her first tour at age 17. Known for her diverse collection of vinyl, Nails always brings a smile, and a lot of pedals. - Guitar Hero II in-game bio

Judy Nails might look sweet onstage, but this alterna-girl is rumored to be a wild child on the wings. Having toured her teen years away, Judy is a rock and roll lifer and princess of the pedal board. - Guitar Hero Encore: Rocks the 80s in-game bio

After realizing that the majority of her fans were 14 year old boys, Judy dropped her label like a bad habit. In her debut solo effort, Punkagothic Rockabillica, Judy brings her own style and shows she can shred with the big boys and then some. - Guitar Hero III: Legends of Rock, Guitar Hero Aerosmith, Guitar Hero World Tour, Guitar Hero: Metallica, Guitar Hero: Smash Hits, and Guitar Hero: Van Halen in-game bio

Judy's real love was rock, and ever since then she's only dated fellow musicians and geologists. She's got more attitude and raw talent than any other girl in alternative rock. Wherever Judy goes, loud noise and screaming crowds follow- sometimes from obsessive fans that just got her signature, and sometimes from nosy reporters who just got her fist in their face - Guitar Hero On Tour in-game bio.

Record labels would love to copyright her climatic riffs and intense style, but Judy is no sellout. She rocks for the music, not for the moolah. When Judy nails a blistering solo, women and men alike wish they were her. It doesn't matter where or when, Judy will rock whether you like it or not. - Guitar Hero On Tour: Decades in-game bio.

Judy's look in the first Guitar Hero has her with short black hair, with her fringe dyed red, wearing a black blouse with short transparent sleeves, black pants to just below the knee with red pinstriping, red belt, a black ribbon around her neck, sweatband on right wrist, a red sleeve-band on her left forearm, and sandals.

The queen of alternative rock, through and through, Judy is always seen in the latest styles. Keep her on the cutting edge with this cute get-up. - Shop description

Now Judy seems to have lost some of her cuteness to appease her punk rock style.

Shocking Pink: Baggy sleeveless sweater with a scoop neck cut with a spray-painted skull and cross-bones on it (except for flame orange when the skull is replaced with a jack-o-lantern), exposing her bra, tight pants with a belt and holes on the sides of the leg, knee-high millitary-like boots, unevenly cut hair with long bangs, and shaved in the back, her left eyebrow along with the right side of her nose and the left side of her lip are pierced, on her right arm she has a striped arm-warmer, a courduroy sleeve attached to a choker on her left arm, and a necklace with a nail on it. She also sports several tattoos and has dark red fingernails.

Tornado Blue: Hair is dyed blue. Baggy sweater top and the plaid boots are blue while her bra is colored white. Tights, armband, and wristband stripe are colored purple.

Jet Black: Judy's hair is dyed jet black and she wears black lipstick. The colored stipe on her wristband and the courduroy sleeve are green. The bra top along with her baggy sweater top and the plaid boots are purple. Her tights and the skull on her top is black (In the PS2 and Wii versions, the skull is still white.).

Flame Orange: In this outfit, Judy's hair is dyed orange (Silver in the PS2 and Wii versions. Her hair is also orange in all versions of Guitar Hero Aerosmith). Armband along with her boots are orange. In this outfit, Her top is white and the skull on her top is replaced with a jack o' lantern while her bra top, tights and wristband stripe is colored grey.

The exact same outfit that Judy was wearing when she was kicked out of Catholic high school at age 15. - Shop description

Purple Plaid: Tight corset with a plaid skirt, with leather straps wrapped around both. A striped armwarmer is attached to her right arm. Armbands on both arm with belt buckles on both. Choppy bangs about her face, with long hair on the top of her head pulled back in a pony-tail with nails in it, the rest of her head is closely shaved. Teared stockings and high-tops. Black choker with nails in it. See the picture on the right for more details.

Dirty Yellow: Judy's hair along with the corset, skirt and bra straps are colored yellow (Her hair is orange in the Wii and Playstation 2 versions of Guitar Hero 3 and is yellow in all versions of Guitar Hero Aerosmith). The stripe wristband is colored grey while the stockings are colored white. The straps and high-tops are orange along with an orange and white striped armwarmer.

Stripes: Hair along with her skirt, high-tops, bra straps, and striped armwarmer are colored blue (her hair is orange in the PS2 and Wii versions and her hair is blue in all versions of Guitar Hero Aerosmith) while the rest of her outfit has black and white stripes except for the corset that is colored black with white outlining on it.

Riot: Judy's hair is dyed black with bits of pink and wears black lipstick in this outfit. The corset is colored in a camoflauge pattern. Armwarmer, wristbands, nonshredded stockings, bra straps, and high-tops are colored black. The leather straps on her pink plaid skirt are purple.

Judy can be seen in other varieties of her GH3 attires.

Tornado Blue: As above GH3 description.

Flame Orange: As above GH3 description.

Jet Black: As above GH3 description.

Goblin: Hair is dyed blonde. Her top is colored green and the skull on her top does not appear in this attire. The bra top is purple along with red tights and black boots.

Bruised: Judy's hair is colored from her Jet Black attire. She wears a black fishnet top underneath her white bra. Her tights are colored blue. The wristband, top and boots are black.

Fuchisa: Judy's hair is the same as in Goblin. Her bra is a purple-fuchisa color, and her top is a darker version of electric pink. The skull does not appear, and is replaced with the word Grrrl. She wears black shorts a little above her thighs to replace her pants. She also wears thigh-high fishnets, plus her combat boots and wristband are black.

Purple Plaid: As above GH3 description.

Dirty Yellow: As above GH3 description.

Stripes: As above GH3 description.

Riot: As above GH3 description.

Disorder: Judy wears somewhat of an orange outfit with fishnets.

Black And White: Judy wears a white outfit with fishnets.

Pirette: A pink half way sleeveless shirt with a skull on it. Black shorts with suspenders, knee high fishnets, black combat boots.

Judy wears a striped shirt, a skirt, and red boots.

Judy's default look is a corset over a tank top with an arm warmer on the left arm, elbow pad on the right arm, a choker with a necklace that has a cross on it, a pencil skirt with camoflouge tights, and black boots. Her hairstyle is the same from GH3 and GHWT, but with a black streak in the front of her red hair and she also has her lip pierced. (She doesn't wear a lip ring in the Wii and Playstation 2 versions).

Judy's default attire is the same from GHWT, except her hair is dyed dark purple with a red streak in the front.

Judy's outifits are somewhat similar to her appearance in the first two Guitar Heros. In the game, a total of new alternate costumes can be unlocked for her after completing the song challenges.

Her normal outfit is a mix to her "Skulls" outfit from "Guitar Hero II" with her "Rocker Grrl" outfit from Guitar Hero III, except she wears a full-length shirt with nothing on the front and fishnet stockings that go down to her knees. She also wears knee-high socks with black and white stripes. Her hair is red in the front & purple in the back of her ponytail. She also wears black strappy gauntlets on her forearms.

In her warrior form, she has the appearance of a demon: her feet have been replaced with goat hooves; her pupils have disappeared, making her eyes white; she wears black eyeshadow and blood-red lipstick, and she has a bat wing.

While not appearing in the game physically, Judy's name is shown to be one of the nine opponents in GHTV's Premium Shows.

The rock meter starts off in the green rather than the yellow, like with encores. Overflowing the rock meter(i.e. hitting streaks of notes while the rock meter is at the maximum) will grant up to 2 power stars. 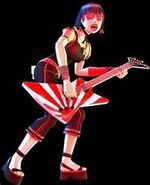 Judy Nails as she appears in the first game

Judy Nails, along with Axel Steel, on the PS2 cover of Guitar Hero II

Judy Nails in her "skulls" outfit

Judy as she appears in GH Rocks the 80s

Judy as she appears in Guitar Hero Encore: Rock the 80s

Judy, along with Slash and Lars Umlaut, as they appear on the cover of Guitar Hero III: Legends of Rock 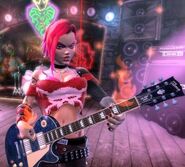 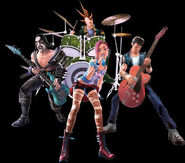 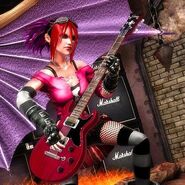 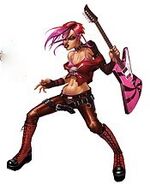 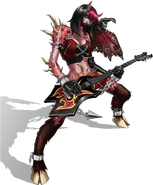