Killing in the Name

Killing in the Name was written and recorded by Rage Against The Machine. The song appears on their self-titled debut album released in 1992.

While not terribly difficult, it can be a bit of a challenge to FC. There are streaks of 12 orange notes within 2 beats at the end of both Chorus 1b and Chorus 2b. Then, there's the Killswitch Solo. Part A is made up of sets of 3 single notes of the same fret. Going O to B to O to Y to B to Y to B to R to Y to R to Y to G. Part B is mostly slow trills between Y and B, and R and Y. Then there's the Noise Build. If anything will keep you from an FC, it's this part. These are 24th notes played between 82 and 87 BPM, and with chord changes every 3 to 4 beats. These go from GR to GY to GB to RY to RB to RO to YB to YO. Otherwise, this is not too hard.

Killing in the Name was the UK's Christmas No. 1 in 2009: In an attempt to stop the X Factor (UK version of Pop Idol) TV show from having the Christmas No.1 for a fifth year, RATM created the Rage against X Factor campaign to bring their song to the top spot. Their campaign received support from other famous musicians and was successful in Britain, but only reached No. 2 in Ireland having been beaten by the X Factor. 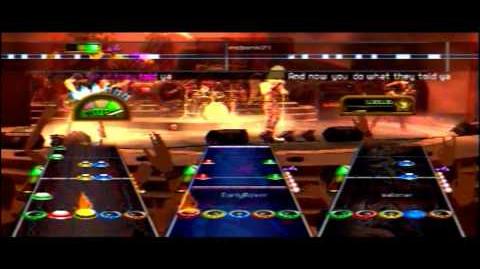