Irish
Pandora is one of the main characters from the Guitar Hero series, first introduced in Guitar Hero. She later reappeared in Guitar Hero Encore: Rocks the 80s with an 80s style look, but was removed from Guitar Hero III: Legends of Rock, as her features were mixed with those of Judy Nails. She consistently represents the goth genre in all her appearances, albeit with Nu Metal inclinations in the first game and a Modern Rock/Emo setlist in Guitar Hero: Warriors of Rock.

In the first game, Pandora wore a black vinyl tank top with blue Lycra pants, as well as black boots that looked like Chuck Taylor sneakers with shinguards attached. She wears a studded (Possibly spiked) choker around her neck. Her long blue hair flowed straight down her back, held from her face with a dark blue headband. She wore black face paint around her eyes, that put emphasis in her inferior eyelashes, and blue lipstick. This is her scariest appearance in the series.

Pandora's first costume (pictured above) is a skin tight leather suit, with black boots. Her hair is dyed light blue, with her fringe coming down to her neck over one eye. Her hair is short on the back, spiked up.

The consummate chameleon, Pandora is admired almost as much for her unique and ever-changing personal style as for her incomparable shredding skills. - Shop description

Pandora's second costume is a simple black shirt and white trouser combination, with large feathers coming out the back, and plushed boots. Her hair is now a more silver-like blue color, simply flowing down the back. She also now wears dark heavy make-up.

To fit in with the 80s theme, Pandora has a sort of androgynous look, wearing a schoolboy-like suit on the upper half, a blue-and-white striped skirt on her lower half, and white boots. Her hair is now much shorter, colored blue with yellow tips, but still covers one of her eyes, but only slightly. She wears her hair in the style of Mike Score, from new wave band A Flock of Seagulls; it is spiked up on the sides and straight in the center (from where her bang falls), and sports a small ponytail right at the bottom of the back of her head.

Pandora returns, after her absence in GH3. She appears in her Leathers outfit in GH2 (except with different make-up), as well as two new costumes - "Midnight Lace", she wore a black and purple outfit with deep purple hair and black make-up with a pair of leather boots, and "Bad Apple" where she wore a school girl like outfit with a deep red vest with a black-grey plaid skirt, knee high gym-like socks and mary jane shoes.

Her starting costume is her "Bad Apple" outfit which was one of the unlockable outfits in GH:OT, only now named "Bad Apple 2000". Badder Apple 2000: Same as the "Bad Apple 2000", only the vest and tie are black and the skirt is red and black plaid.

The 90's outfits are both the same gothic spin-off of a rag dolly-type outfit only one outfit is purple (night) and one is red (day); A short button up dress, with thigh high fishnets, striped arm warmers on each arm and combat boots.

In these outfits, the fringe on Pandora's hair is sticking up to fit in with the 80's, (Less androgynous looking than in GH:80's) she wears a vest with a waist belt, a zebra print skirt, and leg warmers.

Pandora wears a mini dress with long sleeves, a chunky, chain belt, and Go-go boots. One out fit is purple with gold boots (Love), the other is brown with white boots (peace).

In GHM, Pandora wears an off the shoulder purple top along with a zipper skirt and strap on high heel boots. Her hair is long and down with two big curls and a blonde streak and also sports the same makeup on her right eye from GH:WT.

Torso: Off The Shoulder

Pandora's outfit is the same outfit from World Tour. Her hair is white in the Wii and Playstation 2 versions though her hair turns blue if you put a hat on her.

Ringmistress: Looks somewhat similar to her default costume in GH2, but her hair is made to look like a treble clef, she lacks gloves, her coat is larger and heavier, and her shoes are blue.

Gretel: Pandora is made up to look like the traditional girl from the story Hansel and Gretel, sporting long beige hair, a red kitchen dress with an apple on it, and high stockings with high heel shoes. Also, Pandora has a lot of strawberry red makeup and bright colors.

State of Fluxus: Pandora has purple hair twisted into curls (Tubular). She wears a mystic black cloak over a purple and dark pink outfit. She also wears black boots.

Pandora's hair has blue-and-white streaks that flowed 'til her back, whilst her dress resembles a Gothic-Lolita style with lace and spider webs fishnets around her arms. Also, she wears a blue-and-white, thigh-high boots trimmed with purple shoe laces and striped stockings.

She has transformed into a warrior-looking elf: pointy ears, shiny-gold armour embellished with red gems on her arms and shoes; she still has her fishnets around her arms. She also has an unknown symbol on her forehead that resembles the elves; therefore, her warrior form could be inspired by her Irish roots on mythical creatures.

Star power now triples (3x) the multiplier rather than doubling it (2x). 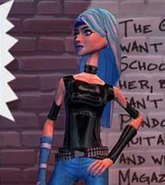 Pandora as she appears in Guitar Hero

Pandora as she appears in Guitar Hero II 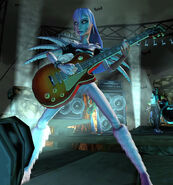 Pandora, along with Izzy Sparks on the PS2 cover of Guitar Hero Encore: Rocks the 80s

Pandora as she appears in GH80s

Pandora as she appears in Guitar Hero: Warriors of Rock

Pandora in her warrior form