WikiHero
Register
Don't have an account?
Sign In
in: Songs played on the PlayStation series, Songs, Songs by Extreme,
and 22 more

Play With Me is a song by Extreme. It is the final encore in Guitar Hero Encore: Rocks the 80s. It is sometimes compared to Hangar 18 in terms of difficulty and hard-to-hit HOPO strings.

In about 80% of the song Gary Cherone is singing the names of several games.

The song begins with a guitar rendition of Mozart's Turkish March, but sped up. It then goes to a small break, after which are rising notes then going into the verse. The song often strays apart from the main riff, adding confusing guitar licks that one will most likely not hit on the first try.

During the bridge, slow long notes are thrown at you, which is a good time to relax. Right after this, however, is the guitar solo, which is where most of the failing takes place.

The solo begins with very fast strumming that lasts about 10 seconds, which ends with a guitar rendition of "Shave and a Haircut". The solo then goes into triplet hammer-ons, but then it throws out some different patterns. The solo ends after a while.

The difficulty, however, is not over. During the chorus the guitarist continues to shred as if the solo is still going on, some say this part is even harder than the solo. The song soon ends in a similar style to the beginning.

In Guitar Hero Encore: Rocks the 80s, it was the final song in the 6th tier, making it the hardest song in the game. In Guitar Hero: Smash Hits it was brought back, along with other previous hits. In this game, "Play With Me" was ranked harder than most songs from the past; it was ranked the 2nd hardest, behind "Through the Fire and the Flames".

Do you want to play?
Uh Ring Around the Rosie, Hopscotch, Monopoly
Red Light, Green Light, G.- I. Joes and Barbies
Hide and Seek, Kick the Can, Cowboys and Indians
Wiffleball, Paper Doll, Hacky Sack and Hangman

Huh do you wanna play with me?
Uh with me?

Uh do you wanna play with me?
Uh with me?

Jack and Suzy sitting in a tree
K-I-S-S-I-N-G
First comes love, then comes marriage
Then comes Adam in a baby carriage 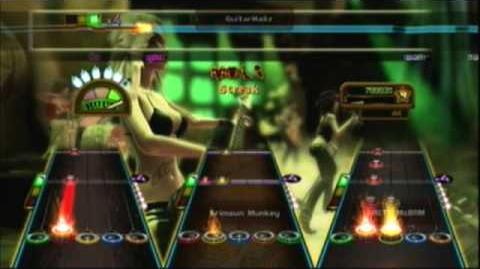