WikiHero
Register
Don't have an account?
Sign In
in: Songs played on the PlayStation series, Songs, Songs by Ratt,
and 18 more

Round and Round by Ratt appears as an encore on Guitar Hero Encore: Rocks the 80s, and as a song on GHTV in Guitar Hero Live. It was featured on MTV's Nitro Circus for background music for the stunt: "Steal Ball Of Death".

The single hardest part of this song is the first part of solo 1, solo 1A. It opens with some long notes, followed by some relatively slow scales. Then, just before Solo B, the scariest four notes ever encountered in a rhythm game are thrown at you; a mordent, following a pattern of YBYR. What makes this so hard is that it is 25 notes-per-second. Just over 1 note per second slower than TTFAF's red snake, this comes as a big surprise on a sightread. 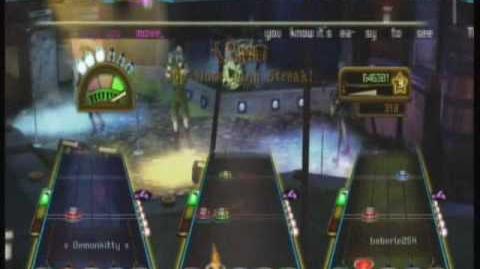 This Guitar Hero Encore: Rock the 80s Songs article is a stub. You can help WikiHero by expanding it.