Shirley's not a simple gal. She likes fancy teas and espresso, aromatherapy, hydrotherapy, meditation and wild flowers. She also likes to do all this with Lacuna Coil blasting a hole in her eardrums. She's a tough girl with a soft side, but don't take that for weakness. As one of the most motivated and talented people in her field, she's currently recording her debut solo album in which she plays all the instruments. Shirts with skulls are also awesome. - Guitar Hero: World Tour, Guitar Hero: Metallica, Guitar Hero: Smash Hits, and Guitar Hero: Van Halen in-game bio

Shirley is a short, slim girl, with purple hair and pale skin. In the main story of Guitar Hero World Tour, Shirley is shown as depressed about playing bass as singers and guitarists are the ones who get all the attention. Her outfit in this game is:

Shirley is one of the unlockable characters to purchase in the game. Her appearance is a dark green top underneath a laced up leather vest with studs, black pants with straps, and hi-tops with the Ride the Lightning version of the Metallica logo on the back of the shoes. To unlock her in this game, you need to get 55 stars on bass career mode.

Shirley appears as one of the unlockable characters, but this time free of money. She wears the same things she wore in GH: WT except the shoes she wears are Casual Rocker instead of Runners.

Shirley appears in Guitar Hero: Van Halen and yet again as one of the unlockables and free of money. She can only be unlocked during Bass Career mode and she wears the exact same outfit as seen in Guitar Hero: World Tour.

She is shown sitting at a coffee shop enjoying a cup of tea when her wristwatch beeps, telling her that she and her band mates are needed. She is then shown sitting at the band's private jet waiting for Marcus Fretshredder, Matty Cannz, and Riki Lee. She looks up and sees them appearing on the horizon, hurrying to meet up with her as they have no time to lose. The intro cuts back to the stage where Lou is hypnotizing people with the sound of a man playing a clarinet. Riki shoves the clarinet player off the stage and the band gets ready to rock. Lou shakes his fist in anger and disappears in a flash of red light. Marcus, Shirley, Matty and Riki play their first notes, freeing the auidience members from their hypnotic trance and the crowd cheers for them.

Instead of showing a flashback of her childhood, it shows her fantasizing herself alone on stage, playing a song and being cheered by the fans, but then she snaps back to reality and notices singer and guitarist who get all the attention.

She appears at a recording studio, singing, playing drums, guitar, and bass as her solo album and finally at the entrance of the concert, fans cheer for her, and she holds a bag of money with Lou behind the camera posing as a reporter.

Marcus Fretshredder is shown sitting on a throne resembling the headstock of a guitar, reading a newspaper, surrounded by women in red dresses. The newspaper shows Matty Cannz in an explosion, the destruction of a statue of Riki Lee, the picture that shows Shirley Crowley with a sack of money and finally, Marcus receives a phone call from Shirley before dejectedly rolling his eyes.

When Matty Cannz gets arrested, Riki, Marcus, and Shirley go their seperate ways. Lou gives her a contract for her solo career. 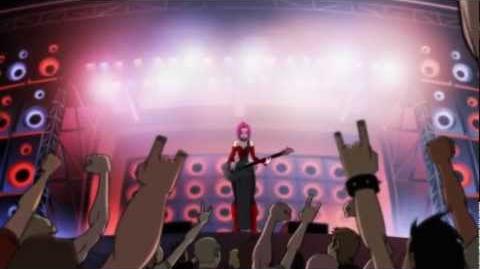 Her name could be a reference to Sheryl Crow, Shirley Manson (Garbage) or Aleister Crowley (which may seem coincidental, since Ozzy Osbourne's song "Mr. Crowley", made in his honor, is featured in the game).

Retrieved from "https://guitarhero.fandom.com/wiki/Shirley_Crowley?oldid=35001"
Community content is available under CC-BY-SA unless otherwise noted.