The Trooper is from Iron Maiden's fourth album, Piece of Mind. It is about the Battle of Balaclava in the Crimean War, and is loosely based on the poem, The Charge of the Light Brigade by Alfred Lord Tennyson. It is one of the 10 songs found only in theXbox 360 version of Guitar Hero II. It is one of the hardest songs in the game because it is very fast.

The Main riff has a tricky rhythm, so practice mode will definitely help you. The solo can be split into three sections:

-The first one has a tricky Y-B-B-Y-B-B rhythm. In order to beat this, strum every second blue.
-The second one is very similar to Stricken's solo, in that you can 100% it by holding yellow, then hitting and releasing orange, doing the same with blue, moving your finger down to red and back up to yellow and repeating. If you are unable to do this, if you have saved Star Power, activate it here.
-If you survived the second section, this one is simply a bunch of trills. If you can tap them, do so, otherwise, strum and attempt to imitate the pattern of the trill.

After the solo, the song is linear and should be no problem.

Although in Guitar Hero II the song only appears on the Xbox 360 version, it is featured in all versions of Guitar Hero: Smash Hits, giving PS2 and Wii owners the opportunity to play the song. 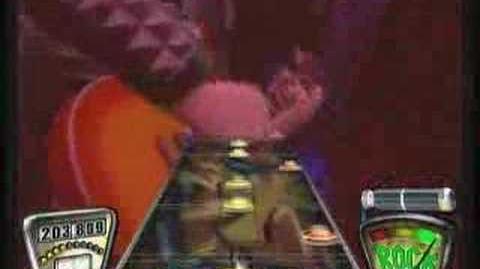