Through the Fire and Flames (also known as TTFAF for short) is a song written and recorded by English power metal band DragonForce, appearing as the first track (and single) on their third studio album, Inhuman Rampage (2006). It is widely considered to be the hardest Guitar Hero song in the series. There are two ways to play this song on Guitar Hero III: Legends of Rock; the lead guitarist (Herman Li's part, some of Sam Totman's part) which is harder and more popular, or rhythm guitarist (Sam Totman's part). In Guitar Hero Smash Hits, the song is available for full band play, with the bass replacing the rhythm guitar.

Because of its inclusion in the game, DragonForce's sales greatly increased following its announcement in the game.[1] The song is also considered by some to be DragonForce's most popular song to date.

Through the Fire and Flames later returned for Guitar Hero Live in GHTV mode, being teased briefly on January 11, 2016 for a few hours but was officially released on February 3, 2016 in the Shred-A-Thon special music channel and was later added back to the music catalog on February 8, 2016. However, it is the 5-minute music video version in Guitar Hero Live due to GHTV having music videos.

The intro is generally considered the hardest part of the song. The intro is all hammer-ons, but its speed results in many players failing at less than 5%. A common method for passing the intro to the song is Tapping, but many find it passable while sticking with one fretting and one strumming hand. Some common tapping methods include tapping blue and orange, or tapping yellow blue and orange. Another way is to hold green with any right hand finger, leave it there, and quickly hit the hammer ons in the second (RYBO) hand position. Either way all notes higher than green should be hit and released to green very quickly.  During the real song the intro is played on the clavichord. Simply hold down the green button and ignore it, focusing on the melody played on the red, yellow, blue and orange buttons and remember to release them to "pull off" to the green note. Many people prefer to tap this section. One trick is to put a rubber band around the green note for the intro. This is not considered "cheating" but more of a cheap trick used to progress more easily. In addition to a rubber band, they could also have another individual hold down the green button.

Technically, the intro is actually full of pull-offs, since in the game and real electric guitar, the ability to pull off makes the green note automatically play and is what propels players through this intro. Had the first note been green, and then the second red, rather than the reverse, then the whole intro could be termed hammer-ons due to the notes approaching from left to right. This would also make the intro very slightly easier due to the ability to hammer on the first note then pull off to green.

Piano style players could try holding green with their pinky and their pointer finger above red. Their other hand could go above Yellow, Blue and Orange. They could then strum the first note with their foot. This would be entirely counterproductive as if they miss a single note then they need to strum with their foot again to restart the streak.

The song involves intensive strumming and fret work and contains the "Red Snake" (within the section of the song entitled So Far Away 3 in Practice Mode on GH3) which has been calculated at about 26.6 notes per second, with ludicrously fast hammer-ons and pull-offs from red, green, red and up to yellow, blue and orange. Shortened up it would be RGR(Y,B,O) around 6.5 times per second. It can be FC'ed by anchoring and releasing the green and red notes right after the Y, B and O taps. In Smash Hits the Red Snake has been changed to similarly fast Y-R-G, B-R-G and O-R-G descending triplets.

It is also worth mentioning that some of the keyboard sections are charted as guitar, such as in Verse 1 and "Synth Death" in GH3. In Smash Hits the keyboard parts have been converted into tap notes which helps identify them.

This is often considered to be the hardest song on the PS2 and Wii version of Guitar Hero III and competes for hardest song on the XBOX 360 and PS3 versions with "The Devil Went Down to Georgia" (Downloadable Content - Boss Battle Track Pack). It is almost always considered the hardest song to pass in any Guitar Hero game, along with Bark At The Moon (GH1 Version), Jordan, Free Bird, Satch Boogie, Scatterbrain (Live), Sudden Death, Black Widow of La Porte and Fury of the Storm. If DLC songs are included, then TTFAF competes with Bark at the Moon (GH2), Surfing with the Alien, Operation Ground and Pound, Revolution Deathsquad, Heroes of our Time, TDWDTG and Duelling Banjos.

On June 3rd, 2008, Chris Chike (Known as Iamchris4life) posted a video of his first full combo (FC) run of the song. It was the first recorded FC of the song. On October 1st, 2008. Baseballkid7 scored the third FC, which also was the last song he had to FC. JPrez44 has also managed to FC it, along with ggamerman. On July 15, 2009, Guitarherodude2008 also got an FC on this song. TTFAF was FCed by Chris Chike long before The Devil Went Down to Georgia was FCed by Danny, although this may be due to the fact that more time was devoted to TTFAF than TDWDTG: TTFAF was in the bonus setlist from the start of the game, while TDWDTG was released as DLC later on.

GuitarHeroPhenom, Danny Johnson, has now FCed this song 27 times (on record). Danny made the Guinness record on February 26th, 2009, breaking Iamchris4life's 8-month streak of holding the title. Danny Johnson, Jprez44, GuitarHeroAddict112, and a few select others have recorded Full Combos of the Guitar Hero: Smash Hits version of this song.

On February 8th 2016, DarklyinDarknessGH became the first person to FC the shortened version on Guitar Hero Live. The difficulty of the song is still incredibly high on GHL, even with it being the shortened 5-minute version. Nearly 3 years later, 2 days before GHTV's shut down, MarinoGaming became the 2nd ever (and the last) person to FC this version of the song on its corresponding engine. 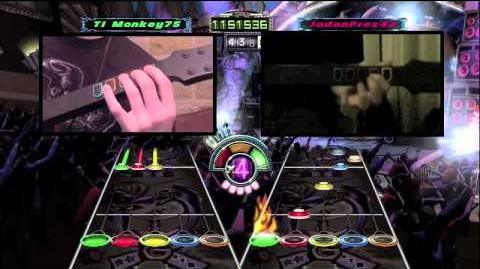 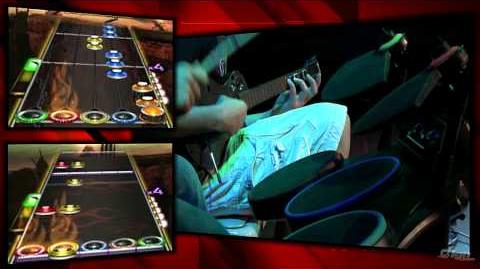 Guitar Hero World Record Through the Fire and Flames (IGN) 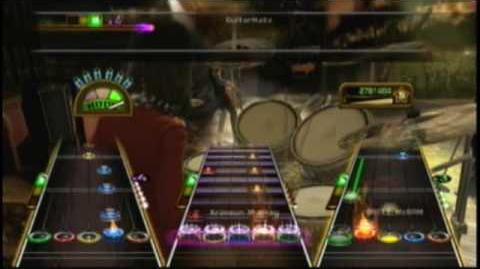 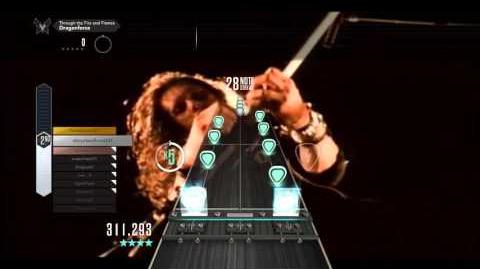 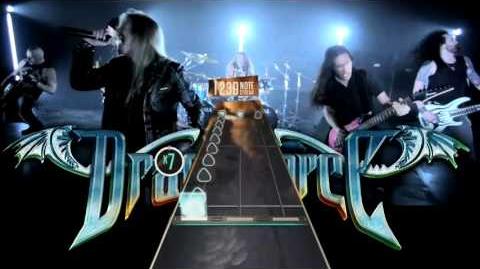 Retrieved from "https://guitarhero.fandom.com/wiki/Through_the_Fire_and_Flames?oldid=40718"
Community content is available under CC-BY-SA unless otherwise noted.